The National Association for Music Education (NAfME) has designated March as Music in Our Schools Month. I am proud to be both a product of  (professional trumpet player) and to have developed a product for (ChopSaver) school music education.

As mentioned in my last post, I grew up in Elkhart, Indiana. Elkhart was  once the “Band Instrument Capital of the World.” In addition, I came from a musical family so it’s not surprising that music became my career. But whether you become a professional or not, participating in a school music program can have a positive effect on one’s life in a multitude of ways.

As “the Arts” are always seemingly under attack in our “pop’ culture society, our friends at the Association of Music Parents are supporting the production of a documentary film on the benefits of school music programs called Marching Beyond Halftime. We at ChopSaver are proud to also support this project.  You can learn more about it here including ways to donate to help defray the cost of producing this important new film.

Learning an instrument and playing in a band or orchestra does two incredibly important things for personal development – self-improvement and working in a group – all at the same time. First, learning to play any musical instrument involves self-discipline, patience, hard work, and attention to detail. As soon as you join with others, you are now using skills that teach team work, how to listen, being supportive of others, empathy, and working towards a common goal. All of these personal and group skills are ones that any employer or company would want in a new hire. For that matter, they are also extremely important traits for those who might want to start their own business.

For many, playing in a school band is akin to playing on a sports team except no one has to stay on the bench! While some in the music world may have a hard time with the emphasis on competition sometimes found in the marching band/drum corps realm, there is nothing wrong with striving for excellence. Improving one’s own skills is great, but seeing how you compare against others, when done in a positive atmosphere, will tell you where you really stack up and can push you to even greater heights. And in the “real world,” there are usually many “competing” for a small number of positions, whether that means becoming a partner in a law firm or winning a chair in a major symphony orchestra.

It is true that competitive marching bands often play the same music for an extended period of time, but the best programs do a good job of balancing the musical diet when it comes time for the “indoor” season of concert and jazz band. While I can’t always watch the bands, every year I attend the Bands of America Grand Nationals, I can always hear what’s going on and many of the performances are simply amazing. And the musical arrangements are often inspired by the great classical composers of all time including Beethoven, Tchaikovsky, Mahler, Rimsky-Korsakov, Debussy, and Verdi, just to name a few. It is a way to expose young ears and their loyal supporters to great music they might otherwise never have heard. That alone makes the activity well worth supporting. 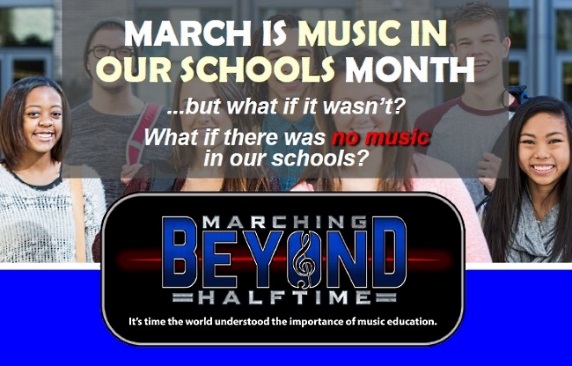