Recently, I attended the opening night of the 2015 Drum Corps International season. Many of you are probably quite familiar with drum corps and what it is all about. A very good history lesson on DCI can be found here as well as on the Drum Corps International website. Perhaps one of the best ways to explain it is to compare it to the better known entity known as a marching band. Marching bands (high school, college or military) consist of brass woodwind and percussion musicians dressed in matching uniforms performing music outdoors (most often an American football field) while moving in learned patterns (called “drill”) that create moving images on the field. These can be something as simple as columns and rows all the way to a moving silhouette of Michael Jackson moonwalking. 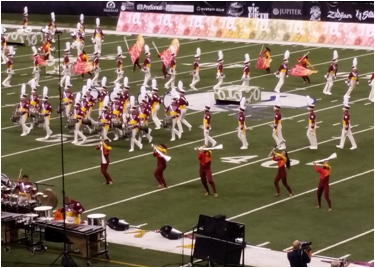 Another aspect to a marching band involves dance. These are performers who don’t play an instrument but add to the overall spectacle with choreographed movement, often while spinning and throwing colorful flags, rifles or batons. This group is often called the Color Guard.

Whereas a marching band will include flutes, clarinets and saxophones, a drum and bugle corps utilizes only brass and percussion and color guard (no woodwind instruments) and they are not affiliated with a school or college. They tend to represent a town or city and often have their historical roots in boys clubs, churches, scout troops and the American Legion.

The DCI season runs from late June through early August. The music can range from classical, to pop and jazz or original compositions. Most shows have some sort of underlying theme and there is almost always a portion of the show that features just the percussion instruments.

The drum corps go on “tour” around the country performing several times a week at college and high school stadiums. The shows are highly competitive and each group is judged based on music, precision of movement and overall effect. Like any traveling sports team, each corps sells merchandise with their logo for their fans to purchase. The amount of time and energy that goes into each show is impossible to quantify. From the teaching staff, the composers and arrangers, the bus drivers, the performers, and even the people that cook the meals, being part of a drum corps represents a tremendous level of commitment, team bonding and hard work. So why do they do it? While I never marched in a drum corps as my marching band experience ended after high school, I think there are several reasons.

Musicians and performers love to do just that – perform. And from ancient troubadours to modern Broadway shows, performers have always been willing to “take a show on the road” and play for an appreciative audience. And the hard work striving for perfection builds friendships and precious memories that last a lifetime.