Home > Blog > Respect for the Music

First in a Series

Recently, my wife Noelle (a professional violinist) and I spoke to the members of the New World Youth Symphony Orchestra. We talked about four pillars of respect that are required for excellence in any musical ensemble. 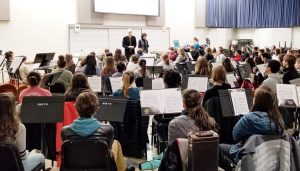 We had the students build a list of the many ways one demonstrates all of those traits when they are part of a performing group such as a symphony orchestra, band, or any other group that takes its music making seriously. Here is the first list.

How to Show Respect for the Music

We thought this list showed some great insight from some very fine young musicians who have only been playing for a few years. Long time professionals would do well to remember many of these points. Perhaps you can think of others.

Next week – Respect for the Conductor