Home > A Cause That Makes Sense

There are thousands of important charities and many companies make the decision to align themselves with one or more of those worthy endeavors. The cause we wish to support is The Ryan Anthony Foundation and CancerBlows.

Ryan Anthony was Principal Trumpet of The Dallas Symphony Orchestra and was a member of the world-renowned Canadian Brass for many years. Since 2012, Ryan waged a heroic and very public battle with Multiple Myeloma, a type of blood cancer.  Ryan was also a big fan of ChopSaver.

Ryan died on June 23, 2020, but his foundation on the concerts he produced have raised millions of dollars for cancer research. The world will never know a more inspirational musician and man than Ryan and we are grateful for his dignity, his grace, and for reminding us what living every moment to the fullest really looks like.

We are proud to support The Ryan Anthony Foundation and CancerBlows by donating 5% of all online purchases to this great cause! 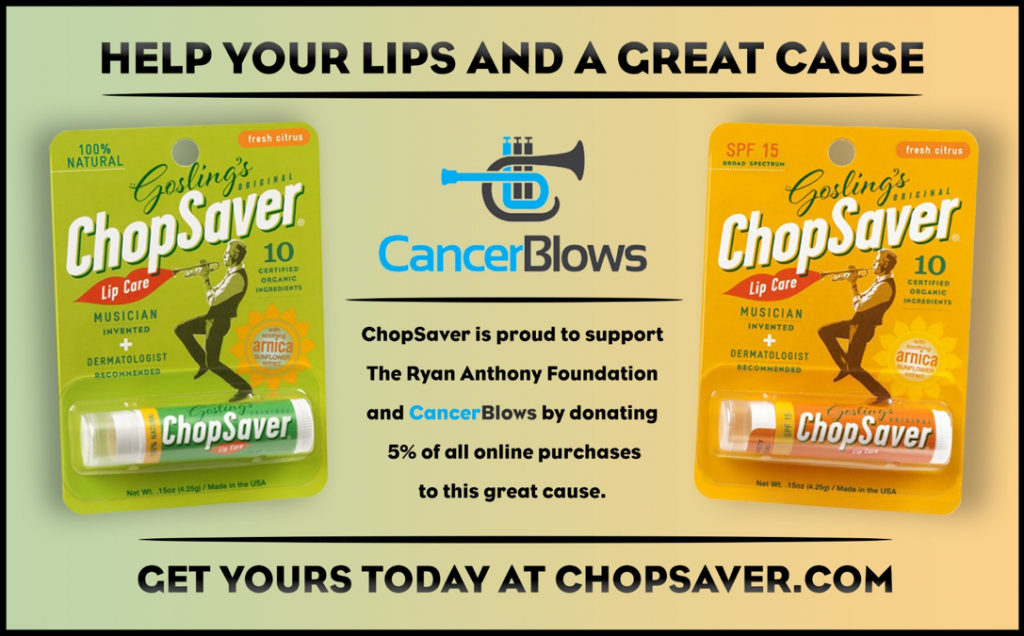 The Ryan Anthony Foundation, a 501(c)(3) non-profit organization, was created in 2014 to manage and support Cancer Blows events. The foundation strives to keep expenses to a minimum and is managed by a talented team of volunteers so that the majority of money given is used for its true purpose – to improve cancer treatment outcomes and ultimately find a cure.

Ryan began playing the trumpet at age 7. A child prodigy, while still in high school Ryan was honored as a Presidential Scholar; was only the second person in history to be awarded the prestigious Seventeen Magazine national solo competition Grand (the other winner was violinist Joshua Bell); and soloed with the Detroit Symphony and Cleveland Orchestra. Since graduating from the Cleveland Institute of Music, Ryan has had a successful career as a trumpet soloist and clinician – soloing with major orchestras around the world; performing for several years with the Canadian Brass and now acting as Principal Trumpet of the Dallas Symphony Orchestra.

Thanksgiving Week 2012, at age 43, Ryan received the unbelievable news that he had Multiple Myeloma. At the time of diagnosis his Kappa Light Chains were over 13,000 (normal is less than 19), his bone marrow was 80% cancer cells and included test results showing ‘high risk’ probability. He had his bone marrow biopsy on Wednesday and, on Thursday, played the National Anthem with the DSO to open the annual Dallas Cowboys Thanksgiving game at ATT Stadium.

What ChopSaver Fans Are Saying

(The following is a guest post by trusted friend of ChopSaver and Certified Formulating Chemist Tammy Lisi. This is her response to the growing trend of do-it-yourself hand sanitizers. Some of this is technical in nature, but to sum up, it is not a good idea, in her opinion.) Hand Sanitizer and the chemist… I’m […](read more)